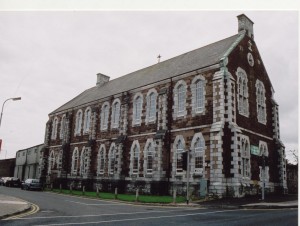 Our school was first opened in 1854 by the Presentation Brothers. The building was designed by Bro. Paul Townsend who was an architect by profession. He also supervised the building of the school and became the first principal of Greenmount school when it opened. The school cost £1717.40 to build and the building is built mostly of red sandstone and limestone.

The school originally had two floors each with just one large room which stretched the length of the building. This allowed one trained teacher to supervise several monitors to teach classes within the large room. The monitors were, for the most part, senior pupils of the school. There would have been over 150 children in each room. Many years later each floor was divided, using wooden partitions, into separate classrooms.

In 1880 the Presentation Brothers applied for recognition as a National School. Permission was refused because of the Cross & Harp on the front of the building. The authorities regarded a Harp without a Royal Crown as being disloyal to the British Queen Victoria. To circumvent the problem a whitwashed Crown was placed over the Harp. Recognition was then given and shortly afterwards the Crown fell down and was never replaced.

Edmund Townsend was born in the barony of Duhallow, County Cork, in 1798. He may have been a convert from Protestantism. He received an education equal to that afforded by present-day universities and could speak Irish, English, French and German and won fame as a mathematician. He became an architect but turned his back on a lucrative profession to join the Presentation Brothers.

Edmund may have known Br. Michael Augustine Riordan , who was also an architect, in the early 1820s, and may have been influenced by him in joining the Presentation Brothers. He was one of Br. Augustine’s assistants in the school in Cat Lane off Barrack Street, Cork, in 1827, and had by then become a Brother himself, taking Paul as his name in religion. By 1829 Br. Augustine had built the new school premises at the South Monastery, Douglas Street.

Br. Paul designed the new school and monastery in Miltown and laboured at quarrying the stone and at the building. He returned to Killarney in 1845 and began preparations for a new school and monastery there. Severe legal and financial difficulties, as well as the Great Famine of 1847, delayed the construction and it was 1861, almost twenty-four years after the Brothers arrived in Killarney, before the building was completed by Br. Ligouri Gaynor.

In 1848 Br. Paul returned to Cork, despite Bishop Egan’s intense initial opposition to the move, to succeed Br. Augustine, whose health had declined, as superior of the South Monastery and also as superintendent and manager of both the South Monastery school and the larger Lancasterian School in Great George Street (now Washington Street). In 1854 he began building Greenmount National School which was completed in 1856. He only retired from these responsibilities in 1871 when age and infirmity forced him to do so. He was succeeded by Brother Austin Shanahan.

It is as a teacher Br. Paul is best remembered. A pupil wrote :
“I can never forget the angelic, kindly man. His childish simpliciy, his humility and deep piety drew children towards him with feelings of confidence. I can never forget the kindly interest he took in my welfare, and there must be a great many, who, like myself, owe their success in life to him.”

Br. Paul died after a short illness on 8 October 1881. His resting place is in the vault in the grounds of the South Presentation Convent of the Sacred Heart, formerly the South Monastery. 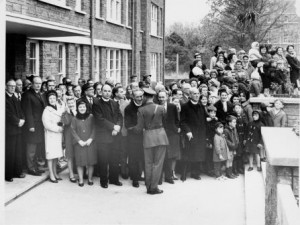 In the 1960s almost half the National Schools dated from the Nineteenth Century, with Greenmount being among the earliest constructed.  The general maintenance and provision of facilities within many of the schools, including Greenmount, was highly unsatisfactory, while teaching equipment was minimal.  In Greenmount professional advice was sought with a view to modernization, reconstruction and extension.  However, the expert consultants advocated the building of a new school, which would be equipped with all the facilities and conveniences of modern education.  Work commenced in 1965 on an adjacent site just 70 yards north of the old building.  The fateful day eventually arrived for Principal Br. Justin Kelly, his staff and the pupils on 3 July 1967 when the old school building, which had served the community so well for over 113 years, became redundant.

The transfer to the new school, Scoil Mhuire na nGrás, brought a welcome change in facilities.  The new building had fifteen classrooms, which were centrally heated, and the children used tables and chairs instead of the old style desks.  The rooms were bright and modern and, although still quite crowded with over fifty in each classroom, it was a very welcome improvement on the old building.  On the 8th of November 1967, Scoil Mhuire na nGrás was officially opened by An Taoiseach, Mr. Jack Lynch, in the presence of all the pupils, the staff and the Principal, Br. Justin Kelly.  The classes were bursting at the seams with numbers reaching their peak in 1971 when 625 pupils were enrolled.

As families grew up and the city spread the numbers attending the school began to fall.  Many teachers were redeployed to primary schools in the new suburbs of Ballincollig, Carrigaline and Glanmire.  The expansion of the nearby University and the increased demand by investors for student accommodation in the Greenmount district meant that young families couldn’t afford to live in the area.  Thus numbers continued to fall and in 1990 the enrolment of 188 was the lowest since the “College on the Hill” was founded.  At the request of many parents and under the guidance of Mrs. Molloy, the Board of Management decided to make the school co-educational and girls were enrolled for the first time in 1991.  This was a major milestone in the history of Greenmount and halted the decline in numbers as the school slowly started to build throughout the 1990s.

At this time also the Parents’ Association was formed and its contribution to school life has been invaluable since then. There have been huge changes in Greenmount over the last decade.  In 1995, the school became the first school in Cork to have special classes for Speech and Language Disorder serving the greater Cork area.

Today, Greenmount is a vibrant and happy school with strong links to the local community.  Currently there are 275 pupils enrolled in the school with another 35 in the playgroup.  The staff consists of 23 full-time teachers and 8 Special Needs Assistants, 6 ancillary staff and four workers in the playgroup.  The Presentation Brothers maintain their links with the school through the Board of Management and in their role as Trustees.

With the completion of a modern extension to the current building, replacing prefabricated classrooms, Greenmount N.S. looks positively towards the future.  We are honoured to celebrate 160 years of education this year and we wish all our past and present pupils well in their endeavors.