On Tuesday the 25th of October 4th and 5th class went to the Cork City Library in the Grand Parade. We went there for the Children’s Book Fest to see ‘Not so Vicious Vikings’. We had a great morning and learned loads about the Vikings!

Firstly we learned that the Vikings originated in Scandinavia. We were particularly interested in the Vikings that came from Norway as these were the ones that settled in Ireland. We learned lots about Viking fashion, clothing and hygiene. The ladies presenting told us that the Vikings wore linen to their skin as it was soft and dries easily and wool over the linen to keep them warm. We were interested to hear that the Vikings were very hygienic and always tried to keep as clean as possible. We were shown combs they made out of pigs bones that were nailed together and decorated!

We also learned lots about Viking weapons and armour. We saw a sword, axe and shield as well as lots of different types of armour! We even got to try some on! The rich people generally had armour like chainmail and metal helmets whereas the poor people just had axes as they were cheaper to make. We did find out that the axes were very useful as they were curved and lighter than swords and we really enjoyed the ‘battle’ between the two ladies! We all had a great and very interesting morning! Hope you enjoy our photos!! 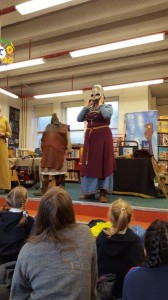 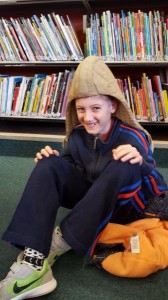 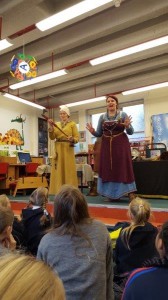 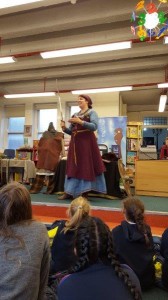 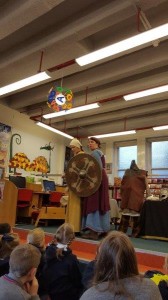 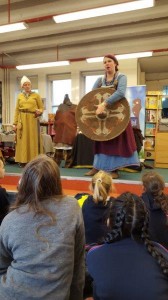 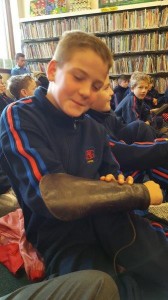 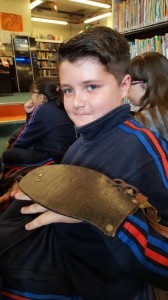